Latest Headlines: Plane with engine on fire after landing at Denver airport

The left engine of a plane was engulfed in flames as the pilot landed at Denver International Airport.

The United flight 5869 took off from Aspen, Colorado at 1.31pm and landed less than an hour later with flames erupting from the engine and spilling onto the tarmac.

Passengers were evacuated on the runway and no injuries have been reported.

There were 65 people on board the Bombardier CRJ-701 plane from Aspen to Denver, which was operated by SkyWest in partnership with United Airlines.

The Denver International Airport tweeted: ‘Arriving SkyWest flight 5869 was reported on fire, all passengers evacuated safely with no injuries. Denver Fire is on scene assessing.’

One passenger @raiyansyed said the fire started after the plane already landed, although the exact timing and cause remains under investigation.

He wrote: ‘Quick and immediate response. First responders on runway. Huge thanks to pilot and crew for helping get passengers off safe.’

Another passenger, Rabia Chaudry, took photographs of the plane being doused with water.

She wrote: ‘Everyone is safe though shook. All our stuff is on the plane. Waiting for diaper bag, stroller, ID, all my personal items.’

The Denver International Airport said an investigation was ongoing and that all other flights were operating as scheduled. 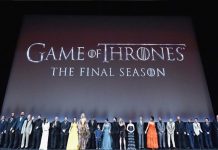